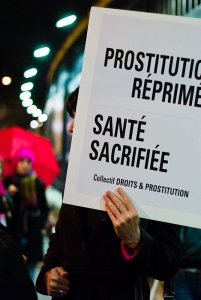 1. Do you think that purchasing sexual services from an adult should be a criminal offence? Should there be any exceptions? Please explain.

No, because people need physical attention and not everyone is fortunate enough to have enough appeal to get it easily. Ideally love would be free – both as in speech and as in beer – but making it illegal to purchase won’t help.

2. Do you think that selling sexual services by an adult should be a criminal offence? Should there be any exceptions? Please explain.

No, because we should be free to employ our bodies how we like, provided it is not causing intrinsic, innate harm to another individual.4 For me, this axiom is more important than almost any other.

3. If you support allowing the sale or purchase of sexual services, what limitations should there be, if any, on where or how this can be conducted? Please explain.

I don’t necessarily think there should be limitations, at least not by default. A better legal and social climate for conducting this business would probably get a lot of it off the street anyway (if that is in fact something that should be aimed for, and I’m not convinced of that). Especially in our winters! Moreover, this sounds like something that should be a municipal issue. They are best equipped to make decisions for themselves on what types of business may be conduced where. (For example, in most places I can’t turn my home into a gas station without some sort of permission.) While some municipalities may make regrettable decisions, they are also in principle the most accountable, immediate, and tractable level of government.

4. Do you think that it should be a criminal offence for a person to benefit economically from the prostitution of an adult? Should there be any exceptions? Please explain.

I think it should be a criminal offence for someone to benefit from the bondage / indenturement5 / enslavement of another individual. And just as it is for any other job, the workplace must be free of harassment, violence and coercion. Making this a more open activity will help ensure that. We must take care not to make illegal things that are 1) not innately/intrinsically harmful and 2) that people crave. It’s practically giving criminals a charter and a business plan.6 And once people are operating outside the law, our ability to ensure ethical behaviour and safety approaches zero. It would be good for both prostitutes and their clients to have safe places to work and to benefit from the work of, for example, office administrators. Conceivably, the person taking calls and booking appointments is someone “benefiting economically from the prostitution of an adult”.

5. Are there any other comments you wish to offer to inform the Government’s response to the Bedford decision?

With many things, we have to be careful to distinguish the innate/intrinsic risks/harms from the extrinsic/circumstantial ones. When most of the risks and harms are driven by the legal climate, we need to rethink our approach.

6. Are you writing on behalf of an organization? If so, please identify the organization and your title or role:

No, but here’s my name and address anyway: William Matheson PO Box ## Sherbrooke NS B## ###

Me: “An open letter to Peter MacKay regarding his proposed restrictions on prostitution”

I kind of suspected this consultation was a farce but I wanted to take it at face value. I wouldn’t have known about it at all were it not for Parker Donham’s Twitter.

@PippaOona * equivocation can be fun! Like saying to a wave, "I think you're swell!" but of course it also has dark applications

@PippaOona and to some extent you even have to be willing to transgress the memetic immune system idea of "read the… twitter.com/i/web/status/1…

@PippaOona The prevention of the healing conversation happens because the representations we are given are full of… twitter.com/i/web/status/1…

@PippaOona I would say that they're wrong because they have nothing to do with reason, but that's just because I ha… twitter.com/i/web/status/1…

@katiedimartin why wouldn't we want to cheer you up

@gregorylent @PippaOona maybe it's like the difference between a gold toilet and a nice bathroom? twitter.com/culturaltutor/…

@PippaOona It's more existential than the shift from newspapers to radio to TV. But it's telling how much old-time… twitter.com/i/web/status/1…

@PippaOona Here's what I think is happening: Legacy media has an incentive to discredit social media, because socia… twitter.com/i/web/status/1…