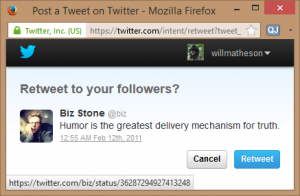 Of course it’s possible to retweet things you don’t agree with in order to call people’s attention to them, and this in fact happens frequently, but it’s not what most people do most of the time. And, for virtually everyone, some things you retweet you do agree with, and so, depending on what your concept of an ‘endorsement’ is, you might put “RTs not necessarily endorsements”. But after you do that, you might think: Wait, isn’t that true of all retweets? Why am I using my Twitter bio to remind people of such an elementary thing?

It’s probably because I’m in danger of being misunderstood. Or worse, being partially understood by someone with power who is (outwardly) axiomatically against what I would otherwise be loudly endorsing. In other words, someone’s going to see that I retweeted something controversial and there’ll be hell to pay. So I’m just going to say “RTs not endorsements”, and I’m covered.

So now you’re retweeting… it’s hard to come up with something that nobody would have a defensible reason not to publicly approve of while promulgating it… someone’s photo of a penguin and its hatchling. “Awwww, so cute!” you want to exclaim. But! RTs not endorsements! We must be open to the possibility that you’re against photographers disturbing the Antarctic!

But that’s not actually your reason for putting that disclaimer up, is it? It’s not for a philosophical reason that we ought to be free to distribute information without passing positive or any judgement on it ourselves. Come to think of it, I guess that’s supposed to be the business of journalists. Okay, stop laughing. I don’t know about you, but it’s hard for me to buy that, because even choosing what to report is a moral judgement, as is choosing how or even whether to balance differing points of view – but I’m not and never have been a journalist, and I’ve never been trained, though I was rejected by King’s.

I suppose if you want to maintain (a veneer of) neutrality that’s fine but I’d have to wonder what the heck you’re doing in such an opinionated environment as Twitter. Perhaps you’re a wise old guru and you’re going to keep your oars out of the water and let everybody else stir things up. I might be more persuaded of that if you were generally a lurker. As soon as you start curating and promulgating, you’re going to be making judgements, including moral ones. The ideal journalist on Twitter might have 0 tweets and 0 following:

(@idealjournalist, on the other hand, is slipping. He has followed 4 people and Tweeted 9 times.)

I’d be willing to bet at least my lunch money, not that such a bet could ever be resolved, that this disclaiming is really out of fear that we’ll retweet something somebody else thinks is wrong or even bad, and we’ll lose followers or even our jobs. Some of us fear this so much that we wish to avoid being seen to be taking any position. It’s almost as if you don’t have any opinions at all. Of course (seemingly) important things come up that we don’t (yet) have an opinion on, but more broadly speaking, doesn’t not having opinions seem a bit disingenuous? How much of a robot are you?

Now let’s take a break and let the people who say “RTs not endorsements” off the hook inasmuch as we ought not to condemn people who choose to hide or even lie in the face of real or highly-potential peril. I’ve explained to my momentary satisfaction why I don’t like seeing it, but I might just be rationalizing my gut belief that Twitter is supposed to be about opinions – so much so that this video I saw in 2008 when I was first signing up, which suggests that it’s about what you’re doing right now, has been downright laughable to me for a long time.

Actually, Twitter is “supposed” to be about whatever enough of a subcommunity (not to mention the sub community) wants to use it for: It’s also a great wire service, and great at a lot of things, really (it’s open mic night every night of the week), but my point is that the part of it that is still about letting your friends know what you’re up to seems rather small. Perhaps it’s all of what’s going on under those infernal protected accounts. You almost want to boot them all onto LiveJournal. j/k

There has been something to fear, at least until today, and probably as sure as the Sun for tomorrow, but not necessarily for any one group of people forever: Being seen to be holding a politically incorrect opinion. I should do a whole post on the evils of political correctness, because it is the modern equivalent of dogma, and it is heresy to break. The sad part is, sometimes the dogma is (mostly) right! But if you try to chip away at one part of it, you get called an apologist for the worst parts of it. For now, it’s apparent (to me) that political correctness edits people down to a sacrosanct narrative, with nuance and accuracy sacrificed at its altar. This is terrible for discourse and consequently for understanding of things.

So as for the people we’re supposedly appeasing by concealing our opinions? The people that expect you to stick to the dogma on their hot-button issue? Don’t harass them, but don’t give in to them either. Stand your ground as much as possible, and explain yourself – at arm’s length, if you have to. They’re the ones choosing to brand you a heretic. And they’re the problem. You might be wrong, but you’re definitely not wrong because somebody couldn’t help but explode in anger when you didn’t meet their expectations.

So here’s my advice, whether or not anyone is looking for it:

As much as possible, don’t be afraid to let people know what your opinion is. (Or your absence of opinion, where applicable.) As much as you let yourself keep things in out of fear, you conform to everybody’s notion that you should be fearful to air such an opinion because there’s something wrong with the opinion. So if this is something important and you have the luxury to speak out, give yourself permission and do it. (But please be civil.)

Another good reason to let people know what your opinion is so that people can understand you better. Just because someone has an interest in something, it doesn’t follow that the arguments behind their opinions are worthless. This would be like saying, for example, dog lovers aren’t qualified to comment on animal welfare just because they have a special interest in it. And it will often be such people who most profoundly and powerfully advocate, because they care about / want that thing the most. That’s okay, or at least it’s not not-okay by the mere fact of this conflation of interest.

Finally, don’t pretend your opinion is sacrosanct and don’t treat other people like their opinions are never going to change, even if they ultimately never do. Both are poisonous to engagement, and consequently for understanding. And we fear what we don’t understand, and that fear is what I believe enough of us will, with time, come to want to kick squarely in the bonch.

LIV: Jessica was a Shakespearean heroine, Gab is an Ontarian heroine.

Actually kind of glad nobody reads these because I committed quite a blunder a while back. The merchant in Merchant… twitter.com/i/web/status/1…

LII: The Gab of my dreams is also more like an orifical gab.

@atheopagan a battering too but more like a buttering

LI. We can enjoy meditation together, with minimal if any adornment.

L: With Gab, it's literally not possible - write instead in Mayan numerals, which in this case would be two dots in… twitter.com/i/web/status/1…

XLIX: Indeed, we will have such.

XLVIII: Or indeed in our own Solar System: en.wikipedia.org/wiki/Dysnomi…