Film Amateura will be playing on Saturday, December 20th, 2003 at 2:00pm at the Oxford Theatre in Halifax. Admission is only $4. See the news release.

ARTS & ENTERTAINMENT
(This article ran as an Arts & Entertainment piece in the December 9th edition of The Journal, Saint Mary's student newspaper.) 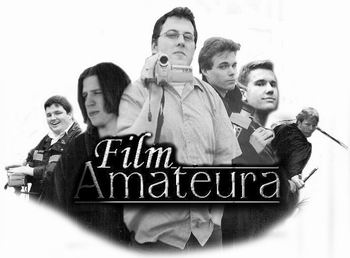 The idea of a play within a play is nothing new; this is a concept as old as Shane Paris, dating back to the days of Shakespeare's Hamlet and beyond. Today, a movie within a movie is a common concept and often works, such as with David Mamet's charming State and Main (2000), but what about a movie within a movie within a movie? Many have tried, most recently Steven Soderbergh with his (only financially rewarding) labour of love, Full Frontal (2002). The critical consensus on Full Frontal is that Soderbergh spent too much time with in-jokes and trying to show the movie within a movie within a movie as some great novelty. Film Amateura, on the other hand, is morally superior because it doesn't get hung up on itself  it isn't about how horribly far Hollywood (or even Bedford) is from the rest of the world; rather, it's a coming-of-age story of the oldest and best kind as we watch a small-time amateur filmmaker try to shoot his way to success. Even though all of Film Amateura is shot on Mini DV, it's obvious what parts are what  Michael Fox is not out to confuse us.

This isn't to say that Film Amateura is simplistic or that there aren't any film business jokes  there is a lot of effective humour concerning the different formats movies are shot in, for instance. There's a hilarious video rental store scene that mocks everything from those horrid "Fullscreen" DVDs to the Olsen Twins, and though the latter may seem like shooting fish in a barrel, the dialogue and the acting of Paul Fox keeps it fresh.

State and Main isn't about the movie, it's about the people, and how a film production changes a small town. Neither is Film Amateura about its movie; the overriding story is about the answer to the age-old question of style versus art. The lead actors, Charles T. Conrad (pictured, right of centre) and Joey Campbell (centre), each represent a different idea of what filmmaking should be, but both are forced to work together due to financial restraints within their film society.

Film Amateura speaks to what we all know as amateur performers, whether in film, stage, literature, or music. This movie does not address the stereotypical spoiled Hollywood actor, complete with trailer, bottled water, and bad attitude; this movie addresses the spoiled suburbia Avril Lavigne-wannabes (this one played by Allyson Haas) who don't even show up for the shoot. This movie makes no compromises in speaking to us about compromise, just like State and Main does on a different scale.

Campbell and Fox never let us forget the humanistic aspect of amateur movie making. Campbell types, Campbell shoots, Campbell feels pain. We've all written stories on paper or in our heads that are nothing more than a series of bad jokes that only the author finds funny  this realization of Film Amateura is not such a story. Fox's desire to tell simple, meaningful stories comes through in the semi-autobiography when the camera breaks, when Campbell is rejected in love, when Conrad hurls yet another insult. The experiences and theme ought to be universal, even with a movie concerning this specialized subject. This might come as a surprise to the makers of Full Frontal, but it's something the people behind Film Amateura and State and Main have known all along.

The most memorable performances in this movie, not to slight Campbell, come from Steve Yorke and Marguerite McNeil (The Scarlet Letter, The Divine Ryans, Shattered City, Marion Bridge). Yorke plays Campbell's character's character in My Big Fat Amateur Movie, and there's an editing room scene with Yorke that must be seen to be believed. McNeil plays Campbell's mother, and she engages in many affectionate battles of wit with her son, laying down the barbs with an emotional truth that you expect from an actress with such venerable experience. McNeil and Yorke play off each other's presence masterfully, in the name of heightening both the meaning and the humour.

There's a deep Santamarian connection to this movie: SMUdents Chris Duval (far left), Jonathan Saunders (first from left), Jeremy Strong (former A&E editor for The Journal), Jenny Allen, Ryan Cox, and William Matheson (both former Frosh Leaders) are all featured. In this day and age where spots in dramatic theatre productions can be hard to come by, amateur filmmaking represents a viable alternative for gaining acting exposure.

Film Amateura will be playing at the Oxford Theatre on Saturday, December 20th at 2:00pm. Admission is only $4. If you're still in town, use your universally popular U-Pass and come up on the #1 or #14 bus. It will be worth the trip, so get out there and support your fellow SMUdents!

Lance meets arrogant, artistic filmmaker Thurston Verness (Charles Conrad - K-19: The Widowmaker, Martha Inc.), and their clashing perceptions about what a movie should be lead to conflict when they are forced to work together, raising the classic question of style versus story.

Film Amateura plays at the Oxford Theatre on Saturday, December 20th at 2:00pm. Admission is only $4.